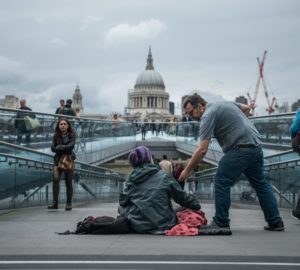 Welcome to London – a place that’s decorated in splendor and infiltrated by diversity. This week’s assignment delves into the varied facets of the local watering holes, the tree-lined streets, and the echoing sounds of change that reverberate upon the walls of the London Underground. Orin Hargraves and Terry Tan envelop us in the varied languages that encircle this metropolis and challenge us to reside within the woven tapestry of the assortment. According to Hargraves, author of Culture Shock! A Survival Guide to Customs and Etiquette London:

London is home to six or nine million people, depending on how you count them. This is the London that persists after the armchair excursion or the two-week tour, and the one that eventually supplants the London of the imagination and tourist London if you come to live here. This book is about that London, the London that people call home.[1]

London is more than riveting clips of Call the Midwife or Dr. Who reruns. It is the melting pot of varied political persuasions, cultural traditions, and religious beliefs. Ben Judah, a journalist for a wide range of publications, including the New York Times, The American Interest, the Evening Standard and the Financial Times[2], reveals:

London is no longer an English city at all. London is a patchwork of ghettos. Right here is Peckham, you have the Africans, over the river in Whitechapel we have the Bengalis, further east from there we have the Pakistanis, and west from here in Brixton we have the Jamaicans.[3]

In 40 years the percentage of white British in London has fallen from 86% to 45%; 600,000 of those in London are there illegally; the number of Africans would fill a city the size of Sheffield; 57% of births are to migrant mothers. A gun is fired on average every six hours; 96% of London’s prostitutes are migrants, as are 60% of its carers.[4]

More than three million Londoners belong to ethnic groups, the largest being the Indian community who have been here for more than a century. Today, the city as a whole plays host to millions of others, either refugees, job seekers from the EU and unaccountable thousands of others lured by the prospect of a (hopefully) better life.[5]

According to a recent census, “London as a city is considerably more diverse than the rest of the United Kingdom. Across England and Wales, 86% of the population is white based on the 2011 Census, but in London that number falls to 69.7%.”[6] This diversity translates over to religion as well. “London is the most diverse area within the UK when it comes to religious beliefs, with the highest percentage of people identifying as Muslim, Buddhist, Hindu or Jewish.”[7] However, according to a recent report by St. Mary’s University Twickenham London, “Those who identify as ‘No religion’ (i.e., Nones, the nonreligious) are 48.6% of the British adult population. This is roughly 24.3 million people.”[8] It’s also interesting to note that the majority of those who define themselves as nonreligious in Britain are, “predominantly White (95%) and male (55%).”[9] Those within Great Britain are not the only ones diverting from Evangelical Christian belief, but they are one of the highest in numbers. Perhaps, if we listen to their stories, we’ll understand their perspective. Perhaps, if we step into the shoes of the skeptic, the immigrant, and the certain, we’ll gain the ability to empathize with their viewpoint and grasp a closer view of London’s landscape.

Terry Tan reveals, “To embrace the shocks is to feel for London what a thousand snapshots cannot do.”[10] Throughout each

There’s only one question: Are we willing to be more than a tourist in London and Oxford? Are we willing to reside within the framework of this sphere of influence and be shaped by the people, the customs, the beauty, and the differences?

[4]Blake Morrison, “This Is London by Ben Judah Review – the Truth About a Capital City Utterly Transformed,” www.theguardian.com, January 20, 2016, https://www.theguardian.com/books/2016/jan/20/this-is-london-by-ben-judah-review.

7 responses to “Welcome to London and Oxford: Are we willing to be more than a tourist?”