There is a lot of technical economic language in Exit, Voice, and Loyalty: Responses to Decline in Firms, 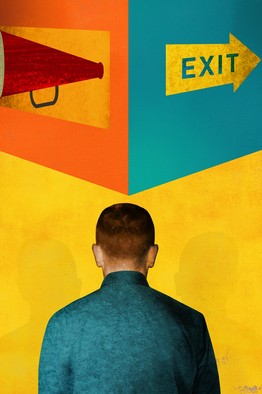 Organizations, and States by Albert Hirschman, in spite of the struggle I had following some of the language – not to mention much of Hirschman’s prose –  I found this relatively small book to be both interesting and insightful.

I think anyone that has spent any amount of time in a church, and especially those that have worked in a church have some understanding of a relationship between ‘exit’ and ‘voice’ – even if though most of us would not necessarily have used those words.

Interestingly, while Hirschman deals with the three forces (exit, voice and loyalty) as separate – albeit related forces – I have found that in a church setting voice, exit and loyalty are inextricably connected.  This happens as voice is ‘found’ or ‘given’ because of either the threat of exit or because of the perceived loyalty of a long tenure of membership.

While there is a considerable number of areas  that could be considered, I want to focus on two areas where I found Hirschman to intersect in important and insightful ways with churches and church leadership.

In this program we are primarily focused on how to lead well in our increasingly globalized world.  Last week we learned about the importance of self-differentiation and understanding that much of leadership is an emotional transaction, not a set of guidelines or principles.   This fundamental truth is missed by many and results in much wasted time and effort in pursuit of the ‘right’ program or ‘skills’ to lead well.

This week, another curtain was removed to reveal a primary cause for the lack of quality leadership.  In his explanation of ‘Lattitude for Deterioration and Slack in Economic thought’, Hirschman highlights a key reason for the presence of sub-standard leadership and/or the lack of good leaders:

The reason for which humans have failed to develop a finely built social process assuring continuity and steady quality in leadership is probably that they did not have to.  Most human societies are marked by the existence of a surplus above subsistence.  The counterpart of this surplus is society’s ability to take considerable deterioration in it’s stride.  ………. The wide latitude human societies have for deterioration is the inevitable counterpart of man’s increasing productivity and control over his environment.  (Hirschman, 6)

As I read that, I couldn’t shake the parallel to the church, which has existed without good leadership or even a concern for good leadership for most of the last century because it didn’t need it.  Church involvement was a cultural expectation – the Field of Dreams mentality (If you build it – or open the doors, or schedule a service or event – they will come) worked not because all of these churches, their worship lives and ministries were vital and well led, but because showing up was part of the expectation of the culture.

In that space, the forces of voice and exit, particularly have been allowed to run rampant in far to many churches, further crippling those church’s ability to respond to the changes in our culture or, even more importantly, live into the call that they have been given as the body of Christ.

The rise of the ‘nones’ (those that don’t self-affiliate with any religious organization or faith tradition) in our current context hasn’t caused the problem for the church, but rather has simply exposed it.  In this way – with an understanding of Hirschman’s concept of slack and deterioration – that, we are seeing a revitalization in the church in some (often unexpected) places.  With the deterioration of our churches now laid bare, the counterbalancing effect can begin to take place, as Hirschman says, ‘it is likely that the very process of decline activates certain counterforces’ (Hirschman, 15).   The very acknowledgement of a problem, of deterioration clears the way for better, maybe even good leadership and practices to rise to the surface.

The second area I want to briefly look at is the somewhat unique interplay between voice and exit in our churches.  In some ways our churches act in ways very similar to the organizations Hirschman looks at, I am thinking specifically of the Nigerian railway example.  Many of our churches are in communities where there are a multitude of other, similar organizations.  Rather than spurring each other onto better and more effective ministries and more and more dynamic worship, the presence of these alternatives has the opposite effect.  Speaking of the railroads, Hirschman says:

The presence of a ready alternative to rail transport makes it less, rather than more, likely that the weaknesses of the railways will be fought rather than indulged.  With truck and bus transportation available, a deterioration in rail service is not nearly so serious a matter as if the railways held a monopoly for long-distance transport – it can be lived with for a long time without arousing strong public pressures for the basic and politically difficult or even explosive reforms in administration and management that would be required. (Hirschman, 44)

With many other churches to attend and ministries to become involved with, the forces of ‘voice’ that might drive change, instead often simply exit.  This process, then, only strengthens the voice and power of those that are perceived to have ‘loyalty’.   This cycle, usually only reinforces and strengthens the systems and practices and the type of leadership that lead to or at the least allowed the deterioration to begin with.

One of the primary responses to to the deterioration – when it has been recognized and responded to – has been to ‘lower the bar’, to try and ostensibly make it easier to be a part of the church or the faith community.  This, though, misses the point.  As Hirschman says, ‘the consumers who drop out when quality declines are not necessarily the marginal consumers who would drop out if price increased, but may be intramarginal consumers with considerable consumer surplus; or, to put more simply, the consumer who is rather insensitive to price increases is often likely to be highly sensitive to quality declines’ (Hirschman, 49)

Translated to the church world, the ‘dynamic’ members that churches crave, aren’t looking for a ‘lower price’ – and will likely not balk at the ‘higher price’ of more rigorous expectations.  At the same time, however, these members are likely to be very sensitive to the quality of the experience in worship or ministry.  Again, Hirschman confirms: ‘those customers who care most about the quality of the product and who, therefore, are those who would be the most active, reliable, and creative agents of voice are for that very reason also those who are apparently likely to exit first in the case of deterioration (Hirschman, 47).

I remember hearing Princeton Theological Seminary professor and Youth Ministry thought maker Kenda Creasy Dean discuss the results of an extensive survey on worship at a Princeton Forum on Youth Ministry.  She remarked, much to the surprise of many, that they found that, according to their data, quality of the worship experience was clearly the most important element in an participants view of the service.  Quality, it turns out, was far more important than style – even when participants had a strong stylistic preference.

I imagine the forces of Voice, Exit and Loyalty will be ones that church leaders have to deal with as long as there are churches.  I am thankful for Hirschman’s work and insight in wrestling with these powerful forces.