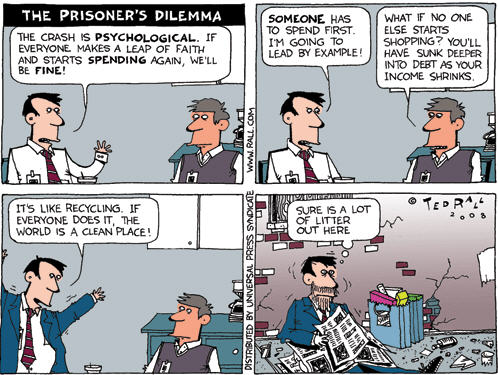 In their book The Rebel Sell authors Joseph Heath and Andrew Potter make a bold and compelling argument that most countercultural movements aren’t really countercultural at all and the ones that actually seek to upend or obliterate the ‘system’ at best are missing the point and at worst are dangerous and detrimental to the very causes they are trying to further.

The authors make some points more persuasively than others, although one of their strongest arguments: that it is much more likely that society might revert to an increasingly Hobbesian state of nature (due to market liberalization, global trade, etc) than it is that one of the world’s modern liberal democracies would morph into a fascist dictatorship….. yet our collective concern – shaped profoundly, the authors argue, by the rise of Nazism in Germany – tilted significantly towards the later.  It would be interesting to hear the author’s thoughts on the current state of American politics specifically and world politics generally…. as the leap to fascism is one that seems much more plausible (to many at least) today than it did even just a year ago…..but I digress.

Keeping in line with the political theme, one of the aspects of this book that I found most compelling was the chapter on Being Normal.  This chapter begins with this statement (emphasis mine):

At worst, countercultural rebellion actively promotes unhappiness, by undermining or discrediting social norms and institutions that actually serve a valuable function.  In particular, the idea of counterculture has produced a level of contempt for democratic politics that has consigned most of the progressive left to the political wilderness for over three decades.  (Heath, 65)

While the origin of the issue is debatable, the diagnosis is not.  In this country, there maybe nothing worse than being part of the political establishment.  For at least the last 25 years the Republican party in the United States has campaigned on one consistent theme above all other: Government doesn’t work.  Their main organizing principle is that, whatever the situation the answer is less government [two quick caveats: 1 – yes, abortion & LBGTQ rights are a major point in contrast to this, but they are the exception; 2 – putting aside a judgement on the merits of conservative/GOP policy here, the major problem with this position is that it actually incentivizes inaction if elected]

In the Democratic party, as we saw this past election cycle, the issues tend to present themselves differently, but really they are two sides of the same coin.  There we saw the ‘establishment’ candidate, Hillary Clinton, attacked not simply from the ‘right, as would be expected. But also from the left.  After a bitter primary fight, Bernie Sanders rallied to support Clinton, but he was unable to excite his followers to do the same.  Clinton, for all the attacks lobbed at her from Trump, surely suffered just as much – if not more – from the vitriol that came from her left, those that supported Sanders and Green party candidate Jill Stein that believed Clinton didn’t go far enough to ‘overturn’ the unjust system. I want this t-shirt

There are many reasons why the Presidential election went the way it did, but the numerical facts are this: if all of the Stein voters in MI, PA and WI voted for Clinton, she would be President.  That is in some ways is a wonderful example of a real world, political prisoners dilemma mixed with the omnipresent concern for non-conformity.

The prisoner’s dilemma  highlights how often we make choices that lead to bad consequences, even when acting ‘rationally’….. From a Stein voters perspective it is hard to imagine that there was a worse outcome that a Trump presidency…. but yet many made that exact choice.   The prisoner’s dilemma is one of those concepts that becomes a lens through which you can see and interpret many things and it is particularly helpful when trying to understand why we act in ways that seem irrational.

The allure of the nonconformist is important here as well.  If becoming part of the establishment or the institution is seen as selling out or losing what is ‘real’ than nothing short of total upheaval of the social order is required.

Heath and Potter say that this is the basic error of countercultural thinking:

Countercultural rebels take the fact that social norms are enforced and interpret this as a sign that social order as a whole is a system of repression.  They interpret the punitive response elicited by the violations of these norms as confirmation of the theory.  The result, too often, is simply a glamorization of anti-social behavior ……politically this mode of thinking can be disastrous.  It leads countercultural activists to reject not just existing social institutions but any proposed alternative as well…….Countercultural activists and thinkers consistently reject perfectly good solutions to concrete social problems, in the name of ‘deeper’, ‘more radical’ alternatives that can never be effectively implemented. (Heath, 96-97)

This is, in essence a more nuanced expression of what they described as they talked about the dating book ‘The rules’: bad rules are better than no rules and it is towards reforming the system and better structures and ‘rules’ that our efforts should be directed.

These are important issues that we need to continue to think about and wrestle with, I believe strongly that one of the most important universal calls of our faith is the ‘continue to work out our salvation [with fear and trembling!] (Philippians 2:12).  However, I am reminded that sometimes the answer isn’t nearly as hard as we make it out to be.

In their conclusion Heath and Potter state that ‘In the end, civilization is built upon our willingness to accept rules and to curtail the pursuit of our individual interest out of deference to the needs and interests of others’ (Heath, 335).  As Christians, our call is similar, but it is not simply out of deference to the needs of others, but in faithful response to God’s love for us and as a witness to God’s love for the world.

For as Christians, the Prisoner’s dilemma is not our own – we are called and compelled by the love that we have first received from Jesus Christ to respond by picking up our cross and daily putting other’s interests before our own.  We are called to be clothed in Christ or as Paul put it in his letter to the Colossians:  ‘And regardless of what else you put on, wear love. It’s your basic, all-purpose garment. Never be without it’ (Colossians 3:14 Message Translation)  Sometimes the Sunday school answer really is where it’s at.  We are called to rise above the Prisoner’s Dilemma, the culture, and even the counterculture to put God first in our lives, and in service to God, serve others before ourselves. 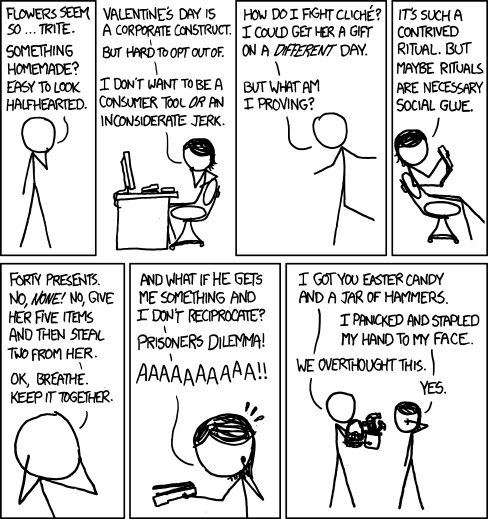 Don’t overthink it – Put on love!