ed. note: the above (and below) picture/quotes are found at the beginning of ‘part 2: the Solution’

When I saw the name of the book we were assigned for this week, I have to admit that I actually laughed out loud.  Nothing against William Bridges, and his book, Managing Transitions, but as one of my classmates put it – ‘managing transitions, Chip, this is your life right now!’  There is quite a lot of truth that statement.

In the last 6 months our we have: moved our family, including 4 school-age boys, in the middle of the school year 900 miles and several states away;  bought a house; sold a house – including extensive repairs we had to manage from 900+ miles away; left the church I had been at for 8+ years; began as senior pastor at our new church – where I am following in the footsteps of a pastor of 20+ years (& 2 short term interim pastors).  I could go on, but you get the idea.

I am actually late completing this blog post because this weekend I was attending to a death in our church, and the funeral service that came with it.  This funeral was the 10th that I have officiated for church members since I began as senior pastor in February.

Through my years as a pastor, but perhaps especially in these last 6 months, I have come to see funerals as an important – maybe even critical part of managing the transitions that we all face.  The funerals that we have one someone dies, obviously serve as an important marker at the end of a life.  For those of us that are Christians, they also allow us to be reminded both of God’s promise of  resurrection into eternal new life and God’s presence with us and grace for us in difficult times.

What I have also realized is that it isn’t only at the end of a life where we need a funeral, or a clear – possibly even ritualized – way of marking the end (or death) of something, which is the necessary first step in creating the room for something new to be planted and grow.  This is what Bridges is getting at when he says:

Before you can begin something new , you have to end what used to be . Before you can learn a new way of doing things , you have to unlearn the old way . Before you can become a different kind of person , you must let go of your old identity . Beginnings depend on endings . The problem is , people don’t like endings . Yet change and endings go hand in hand : change causes transition , and transition starts with an ending . If things change within an organization , at least some of the employees and managers are going to have to let go of something .  (Bridges, Kindle Location 626). 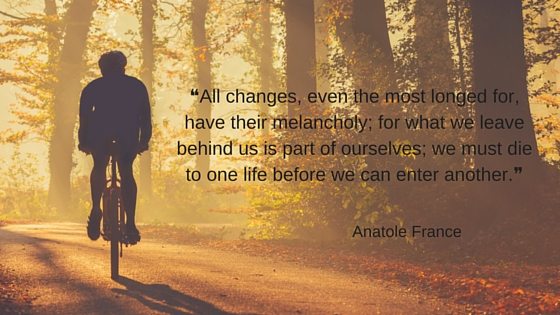 There is a lot to unpack here – and many places where this idea could take us for thought and discussion.  But the weight of managing transitions – not to mention the time frame I am writing this under.  So, I want to just highlight one important thing here.

Bridges says, ‘It isn’t the changes themselves that the people in these cases resist . It’s the losses and endings that they have experienced and the transition that they are resisting . That’s why it does little good for you to talk about how healthy the outcome of a change will be . Instead , you have to deal directly with the losses and endings’ (Bridges, Kindle location 657).   This is especially true – counterintuitively, I think – when the change is clearly needed in a church or an organization…. sometimes the impulse is to forgo the ‘mourning’ process, as unnecessary because the change is so obviously needed and it is likely even ‘welcome’ in many if not most quarters of the church/organization, but this is a significant miscalculation and a big mistake.

The community & those in the organization still need to process and work through one thing ending and another beginning.  If nothing else, there needs to be some type of ‘funeral’ for the old system, the old way of doing things or whatever thing is dying or has died.  Without this step, it is that much easier for those of us working in the church/organization to fall back on and into the ‘old way’ of doing things.   There are likely going to be those that try and revive the systems that you have been allowed to die, no matter what.  But, many just need to be told and allowed to recognize and mourn the loss.

When trying to lead change, you can’t underestimate the importance of managing transitions, as the change is likely not to stick, and will definitely be much more difficult without this crucial skill.

3 responses to “The Importance of Funerals and Other New Beginnings”