I ran out of room for what has become my customary blog title procedure, where I give part of the title and then add, 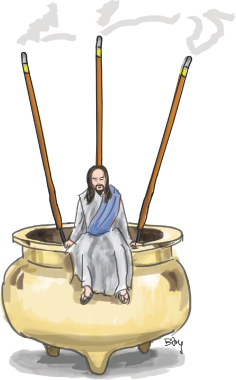 ‘or . . . .’  The first part of the title was just too long this week.  That doesn’t mean, however, that I don’t have an ‘or’, because I most definitely do….. The ‘or’ for this week would be something like, ‘or things I didn’t expect to be reading and thinking about in a book about ‘Asian theology.’

This subtitle is telling in many ways.  First, it doesn’t mean that I wasn’t looking forward to reading Grassroots Asian Theology: Thinking the Faith from the Ground Up by Simon Chan.  But, if I am being completely honest, I didn’t necessarily expect to connect so closely to as many parts of the book as I did.  And even more than that, I think I expected it to be and/or feel more foreign and exotic.

This is a disheartening and embarrassing revelation for me to admit – it was just as embarrassing for me to realize.  There is, of course, nothing wrong with experiencing something as new or different, in fact encountering new (to me) and different (from my previous experience) cultures and viewpoints is a high value for me and a significant reason I am a part of this program.

But, the frustrating/disappointing/embarrassing element in my engagement with this book his how surprised I was, not by the differences, but by the similarities.   I was thrilled and enthralled by the sections of this book on ancestor worship, communion and the ‘communion of the Saints’ – especially as I see them connecting directly to my doctoral research on hospitality and adoption (and there is even a section with explicit references to adoption – which have made their way into my thinking and possibly will make their way into my thesis –p. 197-98).

But, at the same time, I was genuinely surprised to find these connections and references and to find such engaging, important and pertinent theological thought and engagement.  I was looking at this assignment as  sort of a ‘vacation’ to an exotic locale and a chance to engage with strangers from different cultures.  I had forgotten, that because of Jesus Christ, and his reconciliation of the world to God, this wasn’t a vacation, but rather a family reunion!

Of course the work and thought and ‘working out of salvation’ of our Asian sisters and brothers would be more than just interesting to me, but actually meaningful and possibly transformative – these are my people or, rather, we are all God’s people and as such we are in this together.

That this comes as a revelation, though wonderful, feels particularly embarrassing because I know better.  I know this already.  My preaching and teaching regularly highlights God’s commitment and love for all of humanity.  I am regularly – usually weekly (possibly too often if you ask my congregation) about our bond and commitment to each other – especially those that we don’t or don’t want to claim as part of ‘us’.

This is a powerful reminder to me of just how powerful and insidious that temptation to division and separation is….. we seem to naturally want to mark out clear dividing lines between ‘us’ and ‘them’ when the message of Jesus is that the good news of the Kingdom of God is that in and through Jesus Christ there is only an ‘us’.  God’s love if for all.  Jesus Christ’s sacrifice and grace is for all.  God’s family and the extending of welcome is, truly, for all of us.

Now that I have said all of that, a few thoughts specific to the text itself – rather than my reaction to it:

9 responses to “The Communion of the Saints, Hospitality, Room at the Table & Adoption”