Identity and narrative are two of the most powerful driving forces in our lives. The questions “Who am I?”, “Where have I been?”, “Where am I now?” and “Where am I going?” influence not just the way that we see ourselves, but the way that we see the world. But what happens when our narratives and identities come into conflict with others? When worlds collide, how do we navigate the tensions that inevitably ensue? 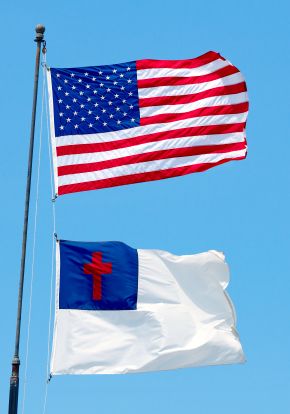 Andrew L. Whitehead and Samuel L. Perry’s book Taking America Back for God seeks to provide context to the narrative of Christian nationalism that has taken root in the American identity.  The duo defines Christian nationalism as “a cultural framework – a collection of myths, traditions, symbols, narratives, and value systems – that idealizes and advocates a fusion of Christianity with American civic life.”[1] They identity four types of Americans when it comes to Christian nationalism – each with their own narratives of what it means to identify America as a “Christian nation”: Rejecters, Resistors, Accommodators, and Ambassadors.

During the 2016 election, a question that I kept seeing over and over again was over the conservative evangelical response to Donald Trump. “How could a Christian vote for a man like this?” popped up across social media with people both defending Trump and attacking his character. Simultaneously, one saw attacks on and defense of the Hillary Clinton campaign. While one can argue it was the mentality that Trump would defend the “Christian heritage America holds so dear” and Clinton would destroy it, the issue at hand goes much deeper than that.

A war for both power and identity has been raging. Being away from America for six years has given me both an insider’s look and an outsider’s look into what is happening. The language and narrative that I’ve heard used is one of fear – fear of a loss of power. The conservative response to Donald Trump’s rise to power blew me away as conservative evangelical leader after leader gave Trump a moral pass on the grounds of the hope he would restore the nation’s “Christian” identity. We feel most vulnerable or hostile when we perceive that the identity we hold closely as our own is under attack. In this case, the narrative became “If you’re a true Christian, you will vote for Trump.” The idea of an American identity was hijacked using Christian language. What believer could stand against a blunt accusation of, “How could you, a Christian, not vote for someone who wants to reinstate Christian values?” Though between the lines, they were saying, “Why do you not want to reestablish the place of power we once held?”[2] If I learned anything during the election, it was that much of American evangelicalism is a political party that masks itself with the name of Christ.

One of the beautiful parts of America is that it is a nation that is composed of many people groups from around the world and brings with it a myriad of cultures. However, this brings with it a set of challenges in and of itself in its heterogeneity. Everyone has a different idea of what it means to be an “American”. I often wonder if there is any such universal idea that truly binds Americans together in a common identity. When I read the news or scroll through my friends’ social media accounts, Greg Lukianoff and Jonathan Haidt’s “Untruth of Us vs. Them” becomes ever clearer as the language of fear is used to mobilize one group against the other.[3]

America is and has been suffering from an identity crisis. How do we navigate the American identity going forward? We say that America is a Christian nation and try to “Christ-Wash” our history and identity, but this only adds to the myriad of competing narratives for America’s identity. Can America be “taken back for God” if its identity was never truly founded upon God? At the end of the day, what does it mean to be “Christian” and “American”?

[2] I do want to note that these were my observations from afar and these are reflections I have had over the past four years. I recognize that the media may present these ideas in a different light, so please forgive and correct any misgivings that I may have.

11 responses to “The Christ-Washing of the American Identity”