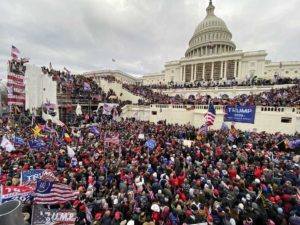 Augustine’s writings hold a powerful influence on the theology and bureaucracy of the Western Church to this day. In his works, City of God and The Two Cities, we can trace the theological influence of his doctrine of original sin, the outline of his Neoplatonic philosophy, and his beliefs about the connection between religion and politics. Ultimately, Augustine believed that God created the world in goodness and yet the incapability of humanity to live a virtuous life due to the stain of Adam’s choices. While the old saint of Hippo did not want a theocratic government, he did believe that secular rules should follow Christian principles for the good and order of society.

Augustine is one of those ancient standard-bearers of our faith that despite how many times I have read him, I continue to find the echo and rhymes of Christian history. As we live in what some theologians have dubbed a post-Christian era, I see the similarities with Augustine’s time at the rise and fall of a “Christian” Rome. Like many of our contemporaries, Augustine was trying to bring order to the chaos of his time, in which people doubted the church’s purpose, while others blamed it for the downfall of the Empire.

The American Evangelical church has seen this country as a Christian republic that has trusted in God for far too long. Unfortunately, the myth of America’s founding as a Christian nation has cultivated a nationalistic lens by which the principles of the Bible should ordain all governmental decisions. As a result, the Evangelical culture and politics have waged wars over the decades, whether it be the red scare of Communism, the addition of “One Nation under God” to the Pledge of Allegiance, the support of the Vietnam War, and the elevation of unquestionably corrupt politicians into the highest office of the land.

As the dominance of the Christian narrative collapses, you can sense the fear and the grabbing at power by the Conservative religious-political machine. And the single greatest threat against the church in America is Christian Nationalism, in which allegiance to a political-cultural ideal trump (no pun intended) the Gospel. Why else do we see the approval of children locked in cages along the US-Mexico border, the xenophobia of migrants and immigrants, the harkening back to a bygone era filled with racism and sexism, the affirmation of war in Islamic-centric lands, and the support of the personal weaponization of citizens? A simple stroll through the Gospel of Luke will repudiate all such values as “Christian.”

I recently interviewed the author of “Jesus and John Wayne: How White Evangelicals Corrupted a Faith and Fractured a Nation, Kristen Kobes Du Mez, who argued that Evangelicals are more likely to get their truth from Fox News and Conservative talk radio than the pulpit. And so, I reflect on how we do spiritual formation and leadership in an era of religious and political chaos. Maybe Augustine was on to something when he urged, “But it must not be supposed that folly is as powerful as truth, just because it can, if it likes, shout louder and longer than truth.”[1]

For all my frustration with the grip of the socio-political worldview on many within the church, I take solace in Augustine, knowing that we have been here before. And like the old saint of Hippo, we take hope not in principalities and powers of this world to guide our way but the sovereign power of God through the love of Jesus Christ and the presence of the Spirit within us to seek out the redemption of this world through grace and justice.

4 responses to “Oh, We Have Been Here Before”