You probably familiar with the saying, ‘love means never having to say you’re sorry’.  That phrase has never made any sense to me, and more than that, as I have grown up and learned more and experienced more of both loving and

being loved, it has occurred to me that the exact opposite is closer to the truth: Love means being willing to say sorry as often as necessary – even/especially when you don’t want to, in part because it demonstrates the deepest element of love: putting the other person’s needs above your own.

As I read this exhaustive tome on the history of South African Apartheid, it’s ultimate demise and the leaders at the forefront of its dissolution, The Rise and Fall of Apartheid by David Welsh I kept thinking about that saying and how a modified version, not about love, but about leadership might be particularly applicable to the situation.

The modified saying might go something like this, trite slogan: Leadership means never admitting defeat or relinquishing power.

True proposition: Real leadership is actually about knowing when to concede defeat and relinquish power.

[Author’s Note: I found this blog – and large sections of the book itself, if I am honest – very difficult to reconcile.  As I sketched out this post – and it’s praise of FW de Klerk, I found myself ill at ease, more than a little uncomfortable with that position, which for obvious reasons – that Welsh himself seems to hint at on at least a few occasions.  As a man with a B.A. in History, I am very aware of our tendency to (no pun intended) whitewash the past and make moral idols of those that have gone before us, especially if it allows us to think better of ourselves and our inherited histories.  There is perhaps no better example of this than the treatment of Confederate general, Robert E. Lee over the last 150 years.  He is widely regarded as a kind and principled Christian who was a military genius and only begrudgingly fought for the South in the Civil War in some sense of duty.  As this recent article clearly points out,(article found here ) that idea is almost entirely fictional.  At the same time, we are all products of our culture and environment and when someone is able to rise above those moors and provide visionary – and even moral – leadership that should be both celebrated and examined forensically so we may learn from it.]

We often think about leadership as a gift or ability, but also as a ‘power’.  It can, of course, at the very least, help you gain, consolidate or retain power.   This often leads those in positions of ‘leadership’ into a sort of paralysis or a cycle where the main goal is primarily simply the retention of the power and/or position rather than actually leading the people you are placed over.  We, of course, see this very clearly in modern politics, where the primary impetus for every action seems to be the next election.

This idea is central to Welsh’s primary thesis and conclusion from his important work: That the much predicted ‘race war’ and widespread conflict and bloodshed was avoided at the end of Apartheid and the transition into democracy primarily because of the leadership of Mandela and De Klerk.  Indeed, Welsh says: ‘The decisive role of leadership in bringing about mutual recognition of the deadlock has been stressed: both Mandela and De Klerk went far out on a limb, well ahead of their followers to persuade them that negotiation was the only realistic option.’ (Welsh, 575)

This description, really, sounds like a decent definition of what leadership should look like: stepping out, ahead of those you are leading (which is, of course, inherently a vulnerable position), leading towards what you think/believe is the best outcome for those you are leading, even if you have to persuade, cajole and prod the people to get there.

This critical and all too rare leadership manifests itself in different ways and at different times.  For Mandela, the challenges were about the balance between being someone that the NP and De Klerk could negotiate with, while maintaining the faith and support of his people and fending off challenges of being a ‘sell-out’ for those very negotiations.   It seems to me, as well, that Mandela’s leadership is especially crucial as the balance of power shifts.

The impulse to exact a measure of revenge or retribution for decades of personal and corporate atrocities must have been intense.  But succumbing to those impulses, beyond the moral component, often only serves to perpetuate the cycle of violence and exploitation [One of the most famous cases of this is the terms of the Treaty of Versailles, that ended World War I.  The terms imposed on the Germans were so onerous that it is widely believed to have played a central role in the events that lead to World War II].

De Klerk, on the other hand had different, but equally important leadership challenges.  Like Mandela, De Klerk’s leadership was shaped and influenced by his faith, with Welsh noting that, ‘De Klerk abided by the church’s postulate that what was morally wrong could not be politically right.’  (Welsh, 569).   And he believed that that it was immoral to continue with a system, Apartheid, that had clearly already failed.

De Klerk also repeatedly apologized for the mistakes, injustices, etc. that Apartheid wrought.  These apologies were thorough and, seemingly, heartfelt.  The importance of this can’t be overstated….. As we Americans are currently seeing, if the leader refuses to admit fault and culpability, most of those ‘followers’ will follow suit.   De Klerk’s apology is meaningful and important, not least because, it gives the rest ‘permission’ to follow suit and apologize in word and deed as well.

Finally, De Klerk made the important choice that compromise and peaceful resolution, even one that lead to him relinquishing power and position was far preferable to a desperate clinging to power at the cost of significantly more lives.  How often have our leaders made exactly the opposite choice, to the detriment of all of us?

Friends, this is truly the type of leadership that we should aspire to, the God has called us to and that we are training for. 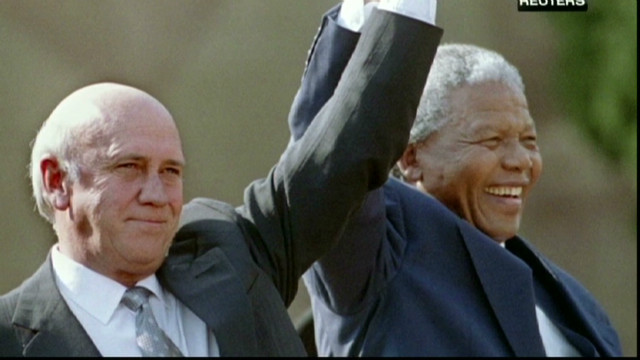 6 responses to “Leadership means having to say you’re sorry”