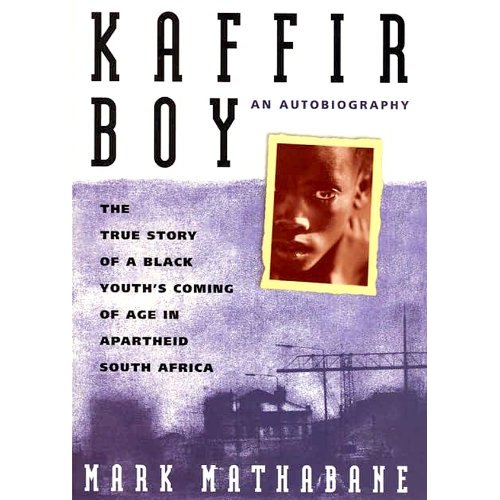 Alexandra, South Africa.  It doesn’t quite feel right to say this was a ‘good’ book or that I enjoyed reading it (in a similar way, that I didn’t enjoy watching Schindler’s list).  But it is certainly a powerful story and a well written book.

And yet, I did struggle to make it through the book and I found it equally hard to know just what to do with the knowledge and information I gained as I read the book.  One of the benefits of a great story is that it can teach us something about ourselves, about others and/or about the world.   This is true even if the story isn’t.

But when the story we are learning from is true, the lessons learned can be both harder and more important.  And there can be no doubt the the personal and cultural/societal lessons that Kaffir Boy has to teach us are critically important.

Even in our increasingly interconnected world, many of us live our lives almost completely in a sort of cultural bubble where, often, we are surrounded by people that are very homogenous to us.  We work with and live next to and our kids go to school with people that look like us.  We are often unaware of the harsh conditions that are the stark realities of life for children like Mathabane as they grow up.  As we all know, knowledge is power, so in a very real way, this book is an important first step.  Kaffir Boy, most certainly draws attention to the realities of what life under Apartheid was like – and through that lens,  what systemic racism, oppression and injustice look like and how they affect people – especially young people.   So, from that perspective, this book is incredibly helpful.

At the same time, I have come to believe that developing relationships with people in different social and cultural settings – and with different levels of power and influence is a critical step in engaging those with power and influence to address injustice and equality.    And while we can often build ‘relationships’ of a sort with stories and the characters (or real people) in them, the relationships only rarely rise to the level of provoking action.

In Kaffir Boy, I was particularly struck by the brief section at the beginning of chapter 27 about Mark’s 10th birthday.  He says this about his tenth birthday:

My tenth birthday came and went away, like all the other nine, uncelebrated.  having never had a normal childhood, I didn’t miss birthdays; to me they were simply like other days; to be survived.  Strangely, however, on each birthday I somehow got the feeling that I had aged more than a year.  Suffering seemed to age me more than birthdays.  Though I was only ten, black life seemed to have, all along, been teaching me the same lessons of survival, and making the same demands upon me for that survival, as it was doing to grown-ups.  Thus, emotionally, I had aged far beyond my ten years. (Mathabane, 162)

Part of why this passage hit me so hard and was so difficult for me was, of course, that I have a 10 year old boy.  And to compound that, I have spend a fair part of my week planning a birthday party (nothing fancy by our community standards – but of course exorbitant in another context) for our youngest.  As we have gotten close to Henry’s party, he has grown more and more excited.  The week has been spent with questions: ‘How many days till my party?; ‘Who is coming to my party?’; etc.

This stark contrast has hit me hard this week and I have been struck by deep feelings of guilt and privilege.  But, Henry is still having his party on Saturday, I haven’t made any changes to my daily life or attempted to alter the daily life of those in this world who are currently suffering under similar injustices and oppression as that I have just read about.

All too often we mistake or we allow ourselves to mistake our feeling bad for the conviction towards action that we should be living into if we are truly following in the footsteps of Jesus Christ.  As I leave this this book (and this semester) this is what I am struggling with – and what I ask you wrestle with as well: How can we lead in such a way that our stories lead to relationships that draw us into Holy action in Christ’s name: not content to simply feel bad about the injustice in the world or recognize our privilege but live out lives actively seeking justice, peace and freedom.