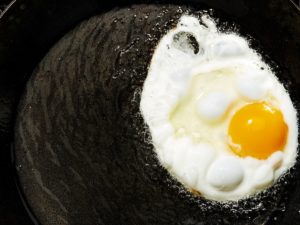 (Thanks to Huey Louis for the title.) Those of a certain age might remember the anti-drug campaign of the early 80s. The public service announcement begins with a frying pan on a stove top, hot and ready. An egg is cracked and plopped onto the pan resulting in an instant sound of sizzling and popping. As the site and sound of the egg cooking fills the screen a narrator comments in the background; “This is your brain on drugs. Any questions?” This was all followed by the words, “Don’t do drugs” appearing on the screen.

Mark Noll in his historical perspective on evangelicalism might consider adopting this same campaign. His greatest concern seems to be the idea that the evangelical mind has been wasted for generations with the drugs of individualism, revivalism, fundamentalism and the like. His seminal work begins with the quote; “The scandal of the evangelical mind is that there is not much of an evangelical mind.”[1]No, please tell us what you really think. Would that Jason Clarke was not such a slave driver and we all had sufficient time to fully digest these works but alas, he is and we don’t.

In short, Noll suggests that what has become the mainstream of US Christianity, evangelicalism, has been negatively impacted by historical theological biases that have led to many of the issues addressed so eruditely by Charles Taylor which we attempted to digest a few weeks ago. He specifically takes aim at the eschewing of traditionalism and the move toward anti-creedalism demonstrated in the holiness and pentacostal movements – ala Juhrmann. These communities are fully immersed in experiential faith at the expense of more doctrinally based communities. But Noll recognizes that; “the creeds about Christ are foundational to Christian scholarship.”[2]“The holiness and Pentecostal movements reinforced the idea that growth in Christ requires the rejection of the world and its learning.”[3]Frighteningly, this includes various aspects of traditional Christian thought. The Christian populism ultimately “scorned tradition and traditional learning.”[4]Noll strongly argues that both are necessary and in fact are not mutually exclusive.

This is one of the challenges in maintaining connection with emerging generations. A faith disconnected from dynamic thinking and processing is juxtaposed to their everyday experience and appears to require an anti-intellectualism that is anathema to them. Noll suggests that evangelical thinking is “bereft of self-criticism, intellectual subtlety, or an awareness of complexity.”[5]It seems like I am writing the same things week to week. Maybe this is what JC (Jason Clarke not THEJC) wants, or maybe I’m stuck in a cynical rut. (This is highly likely – it’s the Kiwi in me.)  However, daily I see the jaded eyes of hundreds of young people as I valiantly attempt to encourage them that affirming the Christian faith does not require them to check their brains at the door. In fact, it requires greater rigor than the alternative.

We need to change the focus from a faith that is “not interested in truth that simply informs, but in truth that transforms.”[6]This can only happen if evangelicals remain in serious intellectual dialogue with other academies in an effort to bring the Gospel to their understanding. Instead “Evangelicals substituted apocalyptic speculation for serious political analysis and creationism for serious geological and biological science.”[7](Bolt It is possible to “accept many conclusions of science regarding evolutionary development while still affirming the trustworthiness of Holy Scripture.”[8]

Those of us in this DMin program will have greater responsibility in regard to pushing evangelicalism toward re-engaging with more secular academies. Not simply in terms of apologetics but also with disciplines ranging from astronomy to zoology and anthropology to world politics.

(I couldn’t think of another academic discipline that begins with a ‘Z’ – I tried.) “Christian scholars should be predisposed to seek knowledge about particular matters from more than one angle.”[9]Sadly, many in the evangelical movement have held “the conviction that a specific formula could capture for all times and places the essence of any biblical truth for any specific issue.”[10]“The Christian faith contains all the resources, and more, required for full-scale intellectual engagement.”[11]“As Christian scholars, we ought to engage in research with one eye toward transforming our academic discipline (where it needs transformation) and one eye toward the (spiritual and physical) needs of the word.”[12]

No one is suggesting that a full return to rationalism and intellectualism is the answer. The early church recognized the need for both orthodoxy and orthopraxis, engaging the mind in coming to terms with incredibly complex beliefs and living faith out in action through the daily application of these beliefs to life. This is what I believe the evangelical church has been missing and why emerging generations have struggled to come to terms with the intellectual challenges they face in the age of rationalism. We would do well to fully engage their minds, filtered through the scriptures and traditional orthodoxy, in those areas that have been ignored by evangelicalism over the past 50 years. Maybe this will be the catalyst for another great awakening. It’s about time.

8 responses to “I want a new drug”