The book The Deep Change Field Guide: A Personal Course to Discovering the Leader Within by Robert Quinn is a

culmination of Quinn’s past works and (exactly as advertised) walks you through a process of discovery about what ‘Deep Change’ is and how to become a leader capable of navigating an organization (and yourself) through that deep change.

The ‘Field Guide’ itself is well and uniquely designed, with an engaging mix of thoughts, questions, anecdotes and even suggested films to watch to reinforce the ideas of each section.

I was immediately drawn into this book, first because of the engaging design of the material, and then by something I read early in the book.  Quinn, in discussing why many companies seeking to copy the corporate success of Toyota end up with poor results, said this: ‘successful implementation of a successful model is not about copying some existing technology. Rather, it is about changing culture, which means changing the way people have thought and acted for years. It is about learning how to learn together and create excellence in real time.’ (Quinn, Kindle Location 390)

Several years ago I heard a talk at conference that highlighted the importance of changing the systems of a church or organization if you want to create lasting change (the example in this talk was about a kid taking out the garbage, instead of leaving out a bicycle, but the point was the same) and the lesson has stuck with me ever since and provided insight into problems and situations that I have dealt with as a leader.  This book has built significantly on that initial exposure to this idea. In all of this good information, I wanted to highlight two thoughts that stuck out to me, both of them from the story of Monty – the ‘horse whisperer’.

First, Quinn talks about the importance of adaptive confidence, saying:

Monty became a master of change because of a disciplined self-change effort. He paid deep attention to how horses organize themselves, coming to know things that most people in his profession never learn. Through this process, he developed adaptive confidence, a belief that he could move forward into uncertain situations and learn what he needed to know as he needed it. Masters of deep change often have a universal theory of change; they tend to believe in their capacity to bring about transformation in nearly any situation. (Quinn, p. 11)

I have seen the power of adaptive confidence in leaders both inside and outside of the church, and in our seemingly constantly changing world and culture, I am not sure that there is any single characteristic that is more important, or at the very least that is more indicative of future success.

When we move from discussing simply leadership to Christian leadership, an important element is added to this confidence – its source.  As followers of Jesus our confidence and faith is not ultimately in ourselves or our own abilities, but rather in Jesus and we rely on the wisdom and leading of the Holy Spirit.

ourselves in uncertain situations and needing skills and abilities that we don’t yet have.  The advantage that we as Christian leaders have as we approach adaptive change is that we have the ability to trust and rely on the grace of God and the wisdom and guidance of the Holy Spirit in these cases as we seek to create new wineskins for the new wine of God’s love and grace in this time and place.  Or in other words, our adaptive confidence is not in ourselves, but rather in Jesus Christ and the grace given to us in the Holy Spirit.

The second thought or observation that I had, came from thinking about how Monty was able to become a ‘man who talked to horses’.  Quinn tells us:

Through trial and error, he was eventually able to communicate in the language of the herd. His goal was to build trust. Monty would adapt to the horse and the horse to Monty as each learned about the other. This would continue until the horse was willing to allow Monty to climb on and ride.  (Quinn, p. 11 Kindle Edition.)

This is why longevity in one place as a leader is so important.   The knowledge that comes – and can only really come – from being with, watching, learning together and being a part of a community becomes a different kind of   ‘leverage’ that can be used to direct and lead deep change.  This leverage, derived from those long period of knowing the ‘herds’ movements and communication patterns, etc.  Allows us to lead deeper, more lasting and radical change than is possible without it.

This seems like a critical learning – leading deep change – requires you to be able to speak the language of the herd you are leading.   This type of leadership is not a temp job, instead it requires commitment, consistency and longevity. 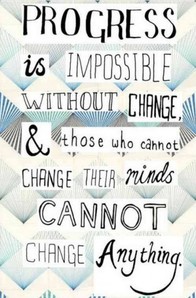