Written by: Colleen Batchelder on January 17, 2019 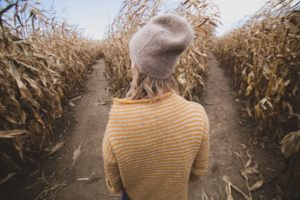 Dr. David John Seel, Jr. harmonizes in thought with Taylor and Smith in his book The New Copernicans and suggests, “When belief and doubt are binary rather than a fused experience – as preferred by New Copernicans (Millennials and Generation Z) – the stakes are too high to be honest about doubt. The church is not a safe place to voice confusion.”[1] If we don’t come to grips with our certainty of uncertainty, we will never be able to engage the fellow skeptics that surround us. When we come to grips with our own doubt, we give others permission to approach the throne of grace with the same authentic expression of honesty – we give humanity a glimpse at our fluctuation and God’s fidelity.

Dr. Charles Taylor, professor of philosophy at McGill University[2] and Dr. James K.A. Smith, professor of philosophy at Calvin College[3] explore the parallel contradictions that create the constructs of one’s convictions and concourse in their books, A Secular Age and How (Not) to be Secular Reading Charles Taylor. They believe that there is a duality within one’s theological framework – a faith that is not the antithesis of unbelief, but paradoxical layers of one’s pilgrimage.

Taylor delves into this dichotomy of vacillation and adaptation and challenges his readers to understand the dynamics of living in a secular age. He suggests that secularization is not a threat to Christianity, but a realistic counterpart that is intertwined in one’s DNA. Taylor defines secular as, “a situation of fundamental contestability when it comes to belief, a sense that rival stories are always at the door offering a very different account of the world.”[4] He asserts that due to the influx of choice, faith has the ability to be conclusive in loyalty and fluctuating in conviction. Therefore, one is always questioning the validity of one’s faith and the ethical implications of its practice. “Faith is fraught; confession is haunted by an inescapable sense of its contestability. We don’t believe instead of doubting; be believe while doubting.”[5] Therefore, one’s faith is not blind, but perceptive and reactionary.

Taylor’s definition of secularization is not cast in the shadows nor brought to the light but found within the grey arena of one’s ability to contest one’s convictions. He believes that “Secularity is a condition in which our experience of and search for fullness occurs; and this is something we all share, believers and unbelievers alike.”[6] This is why Smith asserts a universal duality of belief and unbelief and claims that, “We’re all secular now.”[7] We are caught in the influx of uncertainty and given permission to abide in vacillation.

Taylor and Smith explore the facets of religious history and reveal the ramifications of the Reform and its reconstruction of one’s perception of the spiritual. “At its heart, Reform becomes a drive to make over the whole society to higher standards rooted in the conviction that God is sanctifying us everywhere.”[8] Hence, piety, civility, stoicism, and rationality became the measurable concepts of Christianity. They also served to separate the wheat from the chaff[9], which in turn, gave more credence to one’s works than one’s worth. According to Taylor:

The newly remade society was to embody unequivocally the demands of the gospel in a stable and, as it was increasingly understood, a rational order. This had no place for the ambivalent complementarities of the older enchanted world. The new order was coherent, uncompromising, all of a piece. Disenchantment brought a new uniformity of purpose and principle.[10]

This shift from enchantment to disenchantment changed the sociological and anthropological landscape as well as the theological framework. Individualism replaced the collective voice and personal effort replaced engagement. This, in turn, led one to adopt a position of “Deism, and eventually exclusive humanism.”[11] Therefore, religion was replaced with moralism[12] and self-flagellation.

Smith reveals that “While stark fundamentalisms – either religious or secular – get all the press, what should interest us are these fugitive expressions of doubt and longing, faith and questioning. These lived expressions of ‘cross-pressure’ are at the heart of the secular.”[13] These contradictory realities are always present within our consciousness; however, due to our tendency towards rationality, we live out the tenants of our faith, blindly and faithfully. We believe that stoicism will bring us closer to the good graces of Christ because we have been trained to understand society and our convictions in light of faithful certainty. These two texts are pivotal for our research and our theological framework. They challenge us to see topics from the standpoint of ambiguity and engage our doubts without reconciling to absolute resolutions.

[1]David John Seel and Jr, The New Copernicans: Millennials and the Survival of the Church (Nashville: Thomas Nelson, 2018), 28.

6 responses to “Certainty of Uncertainty”