Horns of a dilemma. That is the term in philosophy to describe the logical fallacy of only being offered two positions, with both being the worst possible outcome. That is what I think of when reflecting on the position of South Africa’s Truth and Reconciliation Commission. The Commission is caught between ignoring the damage of apartheid on the national consciousness as well as the everyday person who must now embrace a future together, or enact retributive justice on those who perpetuated the countless horrors. Compounding the situation is the depth of racism and racist acts is, itself, a slippery slope when attempting to squeeze out justice.

When faced with the horns of a dilemma, one must not settle for the presenting positions and press through the middle until a solution emerges. That is what has captivated me about the solution of Truth and Reconciliation Commission (TRC). The TRC was able to navigate the complexity of realizing a deeply spiritual and psychological virtue of forgiveness. This may be the only example of practicing forgiveness within public policy, because there was no other way. The alternatives would have continued the very atrocities that South Africa was attempting to leave behind.

This is compelling because forgiveness is a difficult concept to actually live out. When it is considered as a course of action, it is offered within the context of personal forgiveness. It is the individual who must forgive, and come to this forgiveness on their own terms. In fact, it is a personal right to allow the individual to choose if, how and when to forgive. To force another person to forgive is not genuinely authentic, therefor, is not actual forgiveness.

So, how can a country invite the citizens into actual forgiveness? It certainly is not a given, nor is it easy, and not everyone will actually participate. Yet, the reason it worked was because the country of South Africa and the people of that country had suffered so much. As Tutu points out in his reflection about Nelson Mendela, it was the suffering that made him compassionate and gracious to find a way to move forward. Suffering is the experience between horns of a dilemma.

Perhaps, it is those who have suffered the most, who are able to sit in the tensions of a third way. A way between opposing views and solutions that seem so clear to others. A third way in the middle of the horns of a dilemma that embraces a future that is difficult to imagine. That is what is so intriguing about Desmond Tutu, Nelson Mandela, and the work of the TRC. The suffering they experienced compelled them into that place of tension between two terrible outcomes. In doing so, they demonstrated a way to live out truth, forgiveness and reconciliation that could restore relationships and a country. It is a tension that is still being lived into, but it is the only one that invited everyone to move forward. 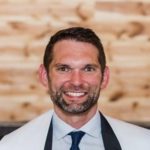 2 responses to “Caught in a Dilemma”