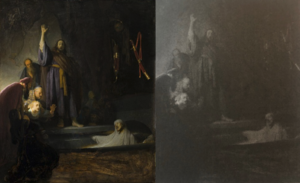 William A. Dyrness’ book Visual Faith: Art, Theology, and Worship in Dialoguge is in a unique category. Not many people can engage with theology and art in current culture as thoroughly as Dyrness did. Many theologians might do art, or some artist might implement some theology but Dyrness approaches the topic with authority and with a level of academic excellence which is unusual. Dyrness has studied theology and art for many years but started as a missionary teaching bible college classes in impoverished homes. He has a real sense of the true Christian heart and he gives a sense that his work does center all around Jesus. This book takes place in a seiers of books called the “Engaging Culture” series, in which different theologians handle a different aspect of art.

At the time of the writing of Visual Faith in 2001 the “emerging church” was just beginning to be written about, and a cultural shift was becoming more evident in America. With this it makes sense Dyrness states, “openness to spirituality is perhaps the most important recent development.” Because of this, there are profound implications for the Christian world for what can be done through art and Christian art.

Dyrness shows how incorporating art into faith is not a new thing but actually would have been very common for the Israelites. Literacy and Grecian paradigms of thought have perhaps swung us too far to the other side of the pendulum and we have forgotten some of the signfiance of art and its role it can play in our faith. Dyrness states that is was the reformation which became a great divorce between the art and the church, but this still was not true universally. The written word has taken its place as the leading voice, and I think rightly so. We have hard enough times trying to interpret the written word, and our interpretation of the written word has split us into thousands of denominations. How much more so if we used visuals, which are so much more open to interpretation, as the main voice for our spirituality. Problematic still, and as Dyrness points ou, the Bible doesn’t really give a strong foundation for a positive view of art, but rather it is a little ambivalent. While lacking in visual art, The Bible makes up for in symbols. Dyrness himself wrote the text book on Themes in the Old Testament in which he utilizes a lot of symbols. It’s also worth noting that Dyrness also the wrote the book on “Poetic theology” which on my opinion is another form of visual theology or literature.

At this point its easy to dive into the old age problem of should Christian use images in worship, or if that actually is idolatry, or even a slippery slope that would lead into idolatry. Deborah Sokolove summarizes Dyrness point on this, “ The Bible says that God actually commanded humans to make objects to be used in worship, and that many of these objects included images, so using images in worship cannot be the meaning of this commandment. Lest we think that, because of their potential power to effect change, symbols are the problem, he notes that the Bible, like art, is full of symbols.” I feel this issue has been more or settled and will simply continue to be a tension in Christendom, with each generation perhaps teetering back to the other side of its preceding generation. History has repeated itself many times with different denominations doing just that.”

Dyrness writes, “ The fact that much controversy attends the use of arts in worship, that artists in Christian communities continue to be marginalized, and that Christians still express confusion regarding their engagement with the arts indicates unfinished business.”[1]

I am often taken back to the scene of the first person baptized in the Holy Spirit was all the way back in Exodus. Bezalel was a craftsman building the tabernacle, and God wanted more than just a plain box. This makes me wish I had pursued art in my own life more, but instead I had given it up for more “important” pursuits of leadership and practical communication. With this soft regret in mind I think I was primed to be ready to apply and respond to Dyrness’ book and he gave some intriguing thoughts in his sixth chapter A New Opportunity for Christian Involvement in the Arts.

One MAJOR critique I had on this book is that it was printed in black and white. For a book discussing the important of art in theology and Christian worship and literature to have been printed in cheap greyscale destroyed its own argument. Was the publisher too worried about its own profits per book to not fork our the extra $1 per book to have it’s photos actually portray what their artists intended. Here I am sitting down reading this book, a captive audience, wanting to become more of a believer in art and theology, and the person preaching to me shares me low-quality images on cheap paper. When I read books like I this I am excited to look through the pictures to see important pieces of art I was not aware of yet. I wish I had not looked at these pictures. The raising of Lazarus on page 55 is an embarrassingly poorly copied picture of the original. I think Rembrandt would have been rather disappointed.

Here the author is saying, “LOOK! Christians don’t take art seriously enough.” And then he goes (ok I’m actually going to blame this on the publisher, but still” and shows how little effort he put into showing art that is important to him. The true Rembrandt is emotional. All of Rembrandt is. Personally, I enjoy the Rembrandt Jesus the most of all portrait of Jesus. And this Lazarus Rembrandt is emotional, creepy, majestic and shocking. Their chosen of medium of this presentation destroyed the message. Perhaps this what happens when academics talk about art instead of an artist talking about art.