First, let me begin by stating something that will be completely obvious to anyone that has engaged w ith William Cavanaugh’s Torture and Eucharist & Being Consumed: There is simply no easy way to boil down all of what Cavanaugh is saying, and all of his important insight into one or two short sentences.

If one were to try, however, they might do a lot worse than citing this passage from Torture and Eucharist: ‘To participate in the Eucharist is to live inside God’s imagination.  It is to be caught up into what is really real, the body of Christ.’ (Cavanaugh, , 279).

Beyond offering that short clipping of Cavanaugh’s own words, I won’t be attempting to summarize these two works for you, but rather to share with you how they have affected me and where they have led my thinking over the last week.

Many times already in the course of our 6 or so months together, we have been told that some of our assignments we will just have to push through and some we will want to squeeze tightly so as to extract every bit of wisdom we can and mark them so that we can return to them at a later date.  Cavanaugh’s work definitely falls in the later category for me, as I found both books to be engaging, challenging and rich with new insights and unexplored avenues of thought.

This is a school holiday week for our town, so this morning, after finishing up reading Torture and Eucharist the boys and I hopped into the car and drove the 9 hours to my mother’s house in Western Pennsylvania.  With the boys all engrossed in their various personal electronics, adolescence or both I was left with my thoughts for most of the drive and, I couldn’t seem to escape thoughts, questions and connections from the book swirling through my mind.

My interest first perked up, just a few pages into the introduction as Cavanaugh discussed Niebuhr’s assertion that ‘the democratic state is the best possible form of governance in a fallen world not because it achieves the good (which is impossible short of the eschaton) but because it achieves the best approximation of peace and justice as a balance among the conflicting self-interests of civil society.’ (Cavanaugh, 8)

The social realm is filled with conflict and compromise and as such must be separate, in Niebuhr’s understanding from the ‘purity of the Gospel’  The church is relegated to a collection of individuals who may possibly influence the world through their own actions – but not as an act of or in community.  Cavanaugh poetically challenges this proposition as ‘the church’s acquiescence in this imagination of a prior conflict from which the state saves us.’ (Cavanaugh, 8).

The relationship between the church and the state and the critical importance of correctly framing that relationship cannot be overstated either from the perspective of understanding Cavanaugh’s argument or, I think from effectively applying it to our current social and political moment.

An incorrect or disjointed (if we are thinking in terms of bodily images) directly inhibits the church’s ability to properly function in an prophetic fashion or to stand and speak for justice.  As Cavanaugh states:

it can be said that the state defends us from threats which it itself creates. The church buys into this performance by acknowledging the state’s monopoly on coercion, handing over the bodies of Christians to the armed forces, and agreeing to stay out the of the fabricated realm of the ‘political.’  Acquiescence to this drama saps the church’s ability to resist where and when states become violent.  (Cavanaugh, 9)

What is the ‘proper’ relationship between the church and the state?  We have lots of different models, both from the witness of scripture and from historical and contemporary sources, but are any of them really so excellent as to be worthy of modeling?

It is no secret that there is a large – Grand Canyon sized – divide in the United States (and many other countries) about how and where Christian faith, belief and practices should be applied to the political and governmental structures.   One only has to look to an article in Relevant magazine this week linked here: http://www.relevantmagazine.com/slices/survey-76-white-evangelical-protestants-agree-presidents-refugee-ban The article highlights that 76% of ‘White Evangelical Protestents’ agree with the president’s refugee ban.  The gap between that 76% and the rest of the Christians I know is, as I said gigantic…..

And it seems to me that, at least some part of that gap is in this understanding of the relationship between the church and the state and what the church looks like (is it a collective group working for good or a collection of individual actors)?  I certainly don’t have all of the answers, but like Cavanaugh, I am convinced that the answers are to be found at the table of our Lord.

The quote on the image below, is from a group that started around the idea that Christians in the US had become to polarized and were identifying with and in something and someone other than Jesus Christ (Democrat/Republican/etc.)  So during the 2012 election they held communion services on election day as a reminder of where our true allegiance is to lie. 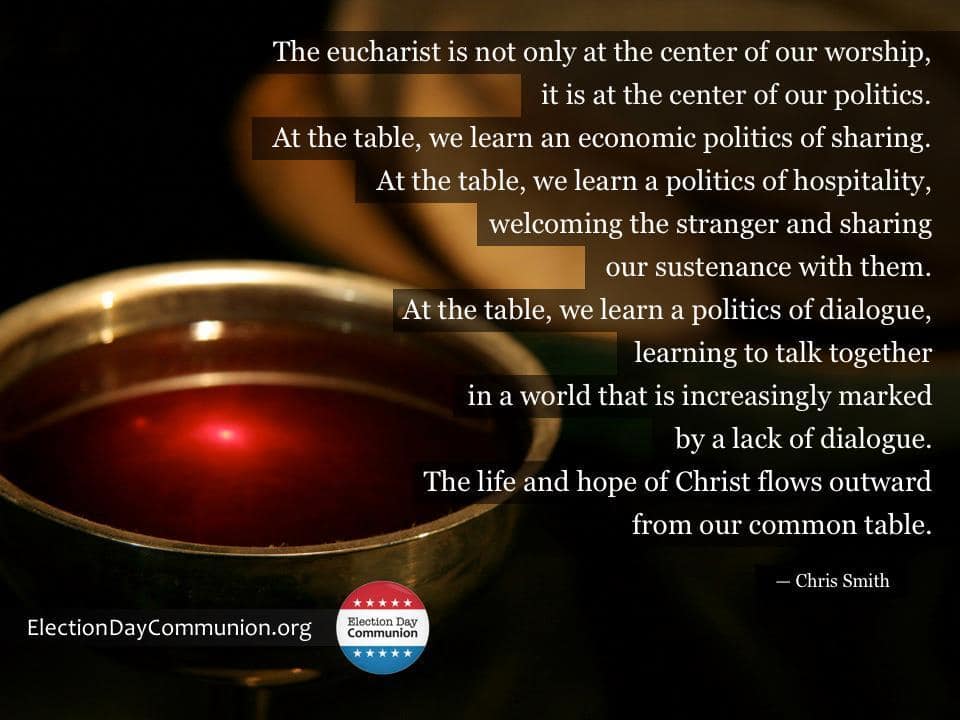 Every Sunday that we celebrate the Lord’s Supper at our church I begin by saying something to this effect: We come to this table, which is not Good Shepherd’s table, it is not even a Presbyterian table.  It is the Lord’s table and all that want to receive the gifts of God: reconciliation, love, grace and forgiveness, are welcome at this table.  Come and receive the feast prepared for you by our Lord, Jesus Christ.

But how do we get to the Table?
In the last chapter of the book, using a discussion of Lawrence Thornton’s novel Imagining Argentina Cavanaugh helps us understand what it takes to get to the table and the importance of being there.  Of the characters in the novel he says:

Confronted with evidence of the miraculous, Carlos’s friends nevertheless remain skeptical, convinced that Carlos cannot confront tanks with stories, helicopters with mere imagination.  They can only see the conflict in terms of fantasy versus reality.  Carlos, on the other hand, rightly grasps that the contest is not between imagination and the real, but between two types of imagination, that of the generals and that of their opponents. (Cavanaugh, 278)

When we were about to go to war in Iraq under George W. Bush, I was working as a youth minister and leading a weekly Bible study in our home.  I remember leading a discussion, prior to the beginning of the war, essentially asking the question: do we want our country to ‘act like a Christian’…..i.e. turn the other cheek, be forgiving, be a peacemaker, etc.   Much to my surprise (this was a very spiritually mature group) the resounding answer was, essentially: no – It would be nice if the USA could act like that but it just isn’t practical…….

And now I wonder, did we all just buy into the wrong imagination?  Cavanaugh says that torture (but I believe you can read into this phrase any type of oppression or injustice) is an ‘anti-liturgy’  through which the state games power over the bodies of others and that the Eucharist ‘provides a direct and startling contrast for in the Eucharist Christ sacrifices no other body but his own. (Cavanaugh, 279).

Cavanaugh concludes with these words and they both haunt and encourage me:

Power is realized in self-sacrifice; Christians join in this sacrifice by uniting their own bodies to the sacrifice of Christ.  Christians become a gift to be given away to others, ………. In giving their bodies to Christ in the Eucharist a confession is made, but it is not the voice of the state that is heard.  The torturer extracts a confession of the unlimited power of the state.  The Eucharist requires the confession that Jesus is Lord of all, and that the body belongs to him. (Cavanaugh, 279)

8 responses to “The Eucharist, the State and the limits of our imagination”