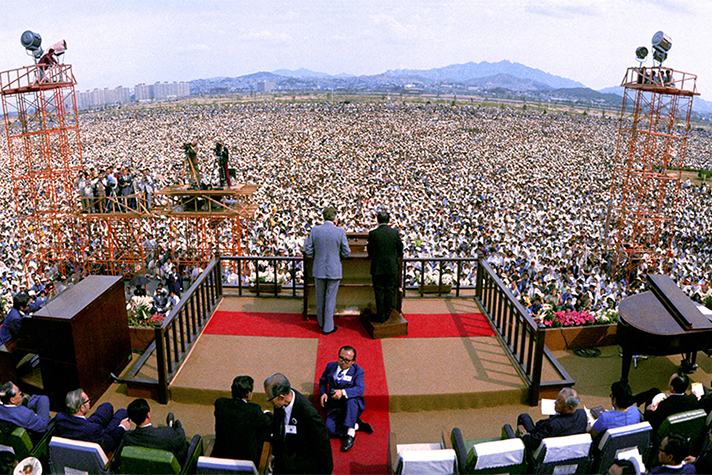 As we read David Bebbington earlier in our LGP studies, “evangelicals” readily identified with conversion, the Bible, activism, and cross-centeredness. [1] Somehow, that name “evangelical” produced baggage, especially in the Western media, and was then tagged with other baggage filled terms like fundamentalism, liberalism, pentecostalism, and charismatics. [2]

As many of you know, I am part of a denomination called “The Evangelical Church” with a name that has been both a blessing and curse.  Our General Superintendent, Brian Eckhardt has defined evangelical in our case to mean, “People of the Good News.” [3] I love this definition, and I believe it would fit in well with our reading this week from Lewis and Pierard regarding “The Gospel of Jesus Christ which is good news of salvation brought to sinners” as being important in defining evangelicalism today. [4]

It is interesting how many churches in my denomination remove the term “evangelical” from their church name. I understand there is a national trend in America to call churches “Community”, “Independent” and “Bible” while removing denominational tags like Baptist and Assembly of God, etc. In fact, I have witnessed more one name churches in the past year than I did in the past 15 combined. Names like Ascent, Passion, and Harvest are more the norm than the church I served at, Columbus Evangelical Church. I have been told there also is the reason of having the mission/vision of your church in your name, hence names like Hope Church and Faith Church or even House of Prayer (our newest name of a church plant in Wyoming). I get it.

However, I still liked having the name Evangelical for my last church. Why? Because I like to equate evangelicalism with the word “transformation!” The life changing, inner cleansing, sanctifying work of God though his Holy Spirit in the hearts and minds of those who have responded to Jesus Christ. Spiritual giants like Jonathan Edwards, John Wesley, Jacob Arminias, William Booth and Billy Graham preached on the “transforming power of the Gospel” and I want to shout AMEN. Without transformation, we are impotent as evangelicals, a mutilated Gospel, which makes religion more about rules than about Jesus my rock and redeemer. Why would the world desire to follow Jesus if he left us the way we were when he found us? I am a NEW creation in Christ, so keep pouring new wine into new wineskins…

My favorite quote from our reading this week is from Leigh Eric Schmidt, which read,

Most of the things that count most about Christianity cannot be counted, like the warmth or coldness of prayer, the resonance or hollowness of Scriptural words, the songs or silences of the saints in heaven, the presences or absences in the sacrament. [5]

Now, onto “globalization”, which Taylor reminded us started with portable transistor radios, progressed to satellite television, then onto the worldwide internet with computers, which eventually allowed us to “shrink and compress” the world, giving us instant possibilities globally with communication. [6]

I found myself wondering, “Why have we resisted globalization?” and it is in that question I will focus the remainder of this blog post. This question has almost made me pull a muscle in my brain. Especially when thinking about Jean’s research topic of immigration. Why do we fight it so intensely. Is it mis-trust? Probably, or perhaps it is control. Some control is necessary, no matter what anyone says. But control gone too far is manipulation and selfish. I also think fear is a part of the explanation of resisting globalization.

This whole debate over the “wall” is fascinating, and exhausting. I will refrain from commenting needlessly on the politics of it, and only will say barriers have been a part of America since it’s founding–property boundary stones, white picket fences, barbed wire farms, gated communities, chain link fenced backyards–all are boundaries. What matters is what humans do with the boundaries, they can either divide needlessly, or define healthiness, mercifully. Like in Montana, I have heard ranchers say a hundred times, “The best gift between neighbors is a good fence.” It shows where the boundary is, but it does not take out the fact that the ranchers still have to be good neighbors who work together, support one another, and build positive relationships together.

Perhaps Christians have resisted globalization because there are negative connotations from several Biblical end time prophecies. One world currency, the mark of the beast, the earth being united for 3 1/2 years in the tribulation. I can understand the concern, but Christians do not have to live in fear of these, at least not compared with the eternal promises of Christ.

Perhaps we resist globalization as Christians because of our concern over compromising our beliefs. We worry that to be global we may have to work with Muslims, Hindus and the like. What Christian parent hasn’t struggled with their children being exposed to other world religions in a reverse-evangelism way? We also resist globalization because of Darwin, Marx, intellectualism and science as a whole. Seen as the enemy to our Biblical beliefs, we won’t let anyone in who thinks differently than us or has a different world view.

Taylor stated “nationalism” is also opposed to globalization, since in America, nationalism is an idol. [7]

Obviously, in our “Elite 8” Cohort, we are all open to globalization. We entered a program called “Leadership from a Global Perspective.”  We all cherish our international experiences, we love our Zoom’s with a Canadian, French, English, Chinese and American perspective. We brag about our cross cultural experiences in our own contexts.

In closing, I choose to be open to the globalization touted by Billy Graham. At age 31, his “crusades” spanned governments, continents, political affiliations, and even racial lines. No person in my memory has better reached across the aisle and ministered to Presidents and Prime Ministers, Priests and Nuns, Nones and Dones, like Billy Graham. How did he do it? As far as I can tell, he got back to the Gospel, stuck to the Gospel, didn’t water down the Gospel, and loved EVERYONE with the Gospel. He was a true person of the Good News.

What a great example of globalization done right!

Superintendent of the Western Conference of the Evangelical Church. Blessed with 28 years as the husband of my amazing wife who I can't make it without. Now three of four in our family are attending University, but both my children are way smarter than me.