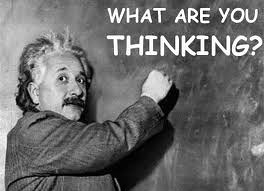 The Miniature Guide to Critical Thinking Concepts and Tools by Linda Elder and Richard Paul was quite the little gem to read. It was packed with a tremendous amount of rich material that was very helpful as I look to become a better critical thinker in my area of research. One of the more challenging sections of the book for me was the chapter on universal intellectual standards. This was challenging mostly because it was new information, but it was presented in a very clear and logical manner. The part of the book I will spend the most time in is the section on essential intellectual traits. These eight traits fell right in line with much of what I engage in daily with the clients in my private counseling practice. Similarly, egocentric thinking was another area that resonated well with daily work with clients and my area of research.

I love how the book starts with…“Everyone thinks; it is our nature to do so. But much of our thinking, left to itself, is biased, distorted, partial, uninformed or down-right prejudiced. Yet the quality of our life and that of what we produce, make, or build depends precisely on the quality of our thought. Shoddy thinking is costly, both in money and in quality of life. Excellence in thought, however, must be systematically cultivated.”[1] This says it in such a bold challenge to all of our thinking and calls us out on the common errors in our thinking and the consequences that result. I believe our society lacks a great deal in the area of critical thinking. I am bombarded daily with clients who struggle to think critically about their life choices and are dealing with the sad consequences. Much of my job is to help my clients “systematically cultivate” their thinking in order to increase their quality of life.

The universal intellectual standards of:  clarity, accuracy, precision, relevance, depth, breadth, logic, significance and fairness were powerfully brilliant.[2] This was a completely new way of breaking down critical thinking into bite-sized chunks that are meant to build on each other in order to ensure quality thought. The examples were helpful how they broke down each one and explained how something could be clear but not accurate, or precise but not relevant, etc. The process of evaluating thought based on these standards is incredibly thorough but ensures quality thought. In these days of constant social media posts and bloggers who are able to put their thoughts out there without any critical thought whatsoever drives me mad many times. What drives me even crazier is how people will emotionally engage with this non-critical thinking for the world to observe, when the thought presented often times isn’t even worth a second glance. The authors agree with me when they say that “universal intellectual standards are standards which should be applied to thinking to ensure its quality. To be learned they must be taught explicitly.”[3]

The section on essential intellectual traits was my favorite. As I read about each of the eight intellectual traits, I not only applied them to myself but also to the work I do with clients. After reading the following definition of intellectual humility: “Intellectual humility depends on recognizing that one should not claim more than one actually knows. It does not imply spinelessness or submissiveness. It implies the lack of intellectual pretentiousness, boastfulness, or conceit, combined with insight into the logical foundations, or lack of such foundations, of one’s beliefs.”[4], I realized how much this is lacking in our culture today. It appears that people rarely want to admit they do not know something and seem fearful of submitting to someone who actually does. I struggled with this for many years and talked about things I knew very little to nothing about out of fear of looking uninformed or stupid. I now look back and see how stupid I really was to function without the trait of intellectual humility. I was very arrogant and I have many clients sitting on my couch who take a long time to put their arrogance aside in order to learn something new that can dramatically improve their quality of life. Their discussion of the trait of intellectual courage goes hand in hand with this struggle. As the authors state, people often tend to avoid ideas, beliefs or viewpoints that bring up negative emotions.[5] I have to work hard in my practice to help clients build up the courage to face those negative emotions in order for them to accept new ideas or beliefs.

Once again, I enjoyed the book but wished the authors expanded further on some of the concepts that they provided minimal information on. I guess that’s probably why it is called the miniature guide to critical thinking.

12 responses to “My Head Hurts From Thinking Critically”